Find some of the most common texting mistakes guys make to attract girls over texts and whatsapp. Avoid these mistakes to be successful in the texting game.

It does not take an Einstein to know that sending vulgar photos to women will not be liked, but there are other texts and images that women hate. And yes, you are the guilty because you have sent it. The biggest problem is that you cannot read emotions on a text message. You can give many turns to believe that you have sent something witty or funny and she understands otherwise. Hence, texts can either work in your way or totally destroy your chances to date that girl. To help you with texting, here are the texting mistakes guys make while having a conversation with a woman over phone.

You think you're being suggestive, but she finds it boring. Never send an empty message content, which is actually a text that requires the person receiving it to do all the job. The first starter message should be the most powerful one where you leave your clear intentions and at the same time the women is not able to ignore it. Many times guys are able to get a girl’s number, but when they send their first text, they get no reply. This is because will a text like “Hey or Hello” your first message which becomes boring. Even if she knows you for a while, it is better that your conversation starters are interesting. Try something like: "Hey I came to know that you like trekking, really??" or “Really bored at home. Lets play the game Simon says...”. If you are fine with flirting then use this “After finishing our date tomorrow, what would you want me to do next?”. Texts should be a little flirty and you must show your interest in girl. Chatting normally everyday will get you in her friend-zone.

A recent survey with women shared that spelling mistake that guys make while texting is one of the least favorite things. The results from surveys are very important to understand what women like and want from men. This is a common texting mistake that guys make and now since you know it is disliked, start typing words correctly. Spelling mistakes sometimes make the sentence difficult to understand and thus it may be a turnoff. Some examples of this are “I am gr8” and “what r u doing???”

Don’t use just emojis to reply "☺"

Emoticons are funny, ironic and easy resource, but should be used along with a sentence. If a woman takes the lead to tells you: "I had a great time tonight," a smiling face will only show that you are not interested in the conversation. The same goes for "LOL!" or "Haha, good!" which does not really count as answers. We are not asking for a novel or Bible verse, only give a complete sentence and then include any emoji . If she says she had fun, just answer, "I also had a great time Thanks for coming with me." Or if she sends you a funny link, send a text to show that you have actually read as: "Very funny! It's a hoot. Replying to a sentence with a smiley face is what will make your texts perfect.

Not being the decision maker

This is fine if you are into five years of relationship. But in the early stages of relationship or when you are trying to impress her, you need to take charge or at least offer a suggestion or two. Women want a guy who will invite her to an adventure, not someone who is waiting for them to make a decision. Your text should be like “Let’s go to a movie” or “I know girls like shopping, let’s go together this Sunday”. She may either say ‘yes’ or ‘no’, but she won’t feel about you as a loser guy who can’t make his decisions.

Sending long text is also a one of the most done texting mistakes guys make. Long texts are really a turnoff for women and sometimes such long texts also show that you are too desperate to talk to her. Although, sometimes you may require to write something long, but if you regularly do it then stop now. Such long texts will make the girl feel bored. Such mass texting should be avoided. You must also take care that you are letting her speak equally. 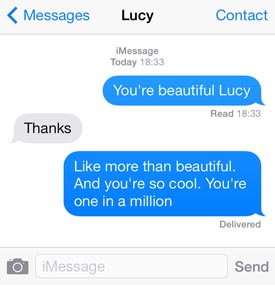 Everyone knows that women like to be complimented, but if you are to act too sweet and flattering her with complements then it won’t work. Over complimenting is also a very common texting mistakes guy make. With this you are actually looking out to be guy with low value and desperate. So make sure that you don’t take this wrong track to impress a girl.

Do not feel obligated to answer every text. In fact, it's better if you do it occasionally as probably the other person will think you're busy or not so urged. Do it occasionally and reply to whatever she has texted you. Also, women like secrets very much. If a woman you are trying to impress every asks you about your girlfriends, it is better that you send a text “It is a secret, I will share with you later in exchange of one of your secret” . Well this is just an example, but try to hold few things and let her know after she reveals a few of her secrets. In this way you both will not only know each other well, but it will also make you both come closer.

This tip is especially for people who are already in a relationship. When your girlfriend makes a plan for tonight and you already have a plan with your friends then instead of texting “I am going with my friends tonight”, you must text something which makes her feel that she is not after your friends. You can make her feel special by including " Hey, I am going out with friends tonight, but in I'll be thinking of you all the time. I cannot wait to see you tomorrow". In this way, she will know that you will be thinking of her and also have something to wait with interest.

For advanced texting tips you can read the advanced attraction blueprint. These are the most done texting mistakes guys make and hence fail in the attraction game. Carefully check out which mistake you have been making and try not to repeat it again in order to attract the girl you like over text.